There is hope for significant improvement in power supply in the days ahead as the Central Bank of Nigeria (CBN) has stepped in to address the liquidity and funding challenges facing the sector. To this end, the Bank has disbursed a total of N120.2bn to different electricity distribution companies (DISCOs), power generating companies (GENCOs), service providers and gas companies.

The 4th Tranche of the disbursement, which is under the N 213bn Nigerian Electricity Market Stabilization Facility (NEMSF), was made in Lagos on Friday, May 20, 2016. The current tranche disbursed a total of N 55.5bn to 24 industry participants including three DISCOs, 14 GENCOs, one service provider and six gas companies. The Governor of the Central Bank of Nigeria, Mr. Godwin Emefiele, while speaking at the disbursement ceremony, which also had the Minister of Power, Works, and Housing, Mr. Babatunde Raji Fashola, in attendance, expressed the commitment of the Bank to support the power sector in order to solve the electricity supply challenges of the country.

Mr. Emefiele explained that the 4th Tranche disbursement marked a major milestone in the effort of the Bank, in collaboration with the Federal Government, to achieve a contract based electricity market. The event featured the signing of power purchase agreements by the Nigerian Bulk Electricity Trader (NBET) to signal activation of industry contracts for power generation under a contract based market. The first disbursement under the NEMSF scheme was effected on February 12, 2015 to different players in the sector. That intervention resulted in the restoration of a total of 905MW of power into the national grid among other impacts.

Specific reports from Generating Companies revealed that there was execution of capacity recovery programmes in three hydro power stations including Intake under water repair project, overhaul of Unit 4 and compliant metering and supplementary protection at Shiroro Dam; overhaul of 2G6 at Jebba Hydro and rehabilitation of three units at Kainji Dam under permitted utilizations of the facility. A total of 300MW capacity increase was reported as a result of fund utilization towards rehabilitation of both plants. Others were rehabilitation of seven gas turbines at three major thermal Power Plants namely Geregu, Transcorp Ughelli, and Ibom Power Plants. The intervention has also enabled the Electricity Distribution Companies (DISCOs) to provide bank guarantees to the Nigerian Electricity Bulk Trader (NEBT); purchase of over 171,071 units of meters comprising both maximum demand and single phase meters; rehabilitation of over 332kms of 11KV lines and 130km of 0.45KV lines; 70,310 No 500 KVA transformers procurement; and construction of 34 new distribution substations and acquisition of one mobile injection substation under confirmed permitted utilization by the initiative. 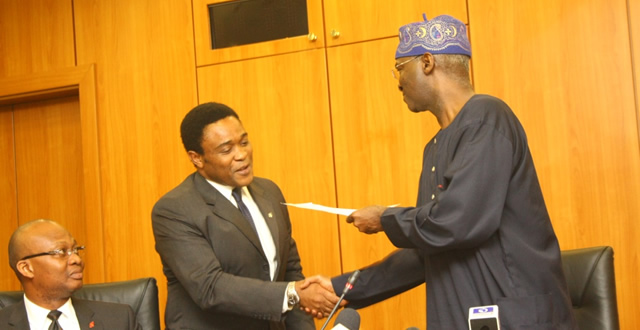 In his remarks, the Minister of Power, Works and Housing, Mr. Babatunde Fashola, commended the CBN for its intervention to help resolve the issues in the power sector. He also called on those involved in the vandalism of gas pipelines to desist from such as it was neither in the interest of the country nor in the interest of oil producing communities as a result of spillage, pollution and other consequences. Also present at the event were CBN Deputy Governors, Dr. (Mrs.) Sarah Alade and Alhaji Suleiman Barau as well as Chief Executives of Banks. Key players in the Nigeria electricity industry including the Nigerian Electricity Regulatory Commission (NERC), representatives of DISCOs, GENCOs, gas companies and service providers among many others were equally present at the ceremony.